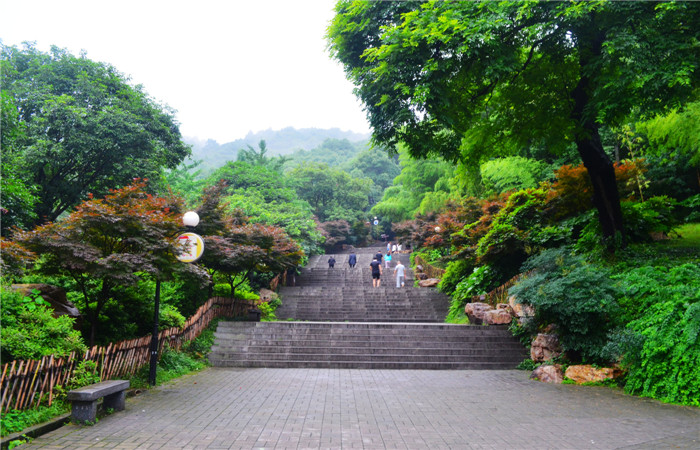 This tour gathers mixed minority cultural, bring to explore the beauty of unique nature scenery in Zhangjiajie, magnificent landscape and unique folklore culture in Guizhou. it is a totally different experience. Highlights:
ITINERARY
PRICE
Q & A(0)

Free Enquiry
Day 01 Arrive in Changsha
Detailed Itinerary: You will meet your tour guide at night, then take a bus to the hotel.  Afterwards, you will visit Huangxing Walking Street.

After breakfast you will take a tour to Yuelu Mountain and Yuelu Academy. You will then be driven to Zhangjiajie.

Yuelu Mountain: Is located on the west bank of Xiang River in Changsha, Hunan, China. Its main peak and the highest point, Yunlu Peak, is about 300 meters above the sea level, it is noted for its many scenic spots, including Qingfeng Gorge, Aiwan Pavilion, Lushan Temple, Yunlu Palace, the White Crane Spring and the Flying Stone.

Yuelu Academy: The Yuelu Academy is located on the east of Yuelu Mountain in Changsha, the capital of Hunan province, China, on the west bank of the Xiang River. It was founded in 976, the 9th year of the Song Dynasty under the reign of Emperor Kaibao, and was one of four most renowned Shuyuan (academies of higher learning).

Day 03 Zhangjiajie
Detailed Itinerary: After breakfast you will visit Tianmen Mountain which is the highest mountain in Zhangjiajie. Your guide will take you to explore the best scenic spots such as Tianmen Cave, Sky-walk Path and so on. Afterwards, you will pay a visit to Yellow Dragon Cave.

Zhangjiajie Grand Canyon is new discovery outside Zhangjiajie National Park one of the best scenic areas in Zhangjiajie city.Also a rated one( AAAA) with the typical Zhangjiajie Formation.

Junsheng Sandstone Painting is regarded as ”the special pride of Hunan” and also of Chinese people in general. It is rated high aesthetically and prized by art collectors.Reputed to be a form of ”green painting” and ”environmental protection painting” in art circles.

Day 05 Morning Arrival at Guiyang
Detailed Itinerary: You will arrive in Guiyang in the morning, where you will meet your English tour guide and begin your  sightseeing with Jiaxiu Pavilion which is the symbol of Guiyang with a long history of more than 400 years.

After lunch you will head to Qingyan Ancient Town, 30km south of Guiyang. It is one of the most famous historical and cultural towns in Guizhou Province dating back to 1378.

Day 06 Guiyang - Anshun
Detailed Itinerary: After breakfast, you will be driven to visit Huangguoshu Waterfall, the largest in Asia, which reaches 76 meters high, 81 meters wide. You will then take a visit to Tianxingqiao Scenic Spot. Tianxinqiao Scenic Spot is composed of three areas: Tianxin Cave, Potted Landscape on Water and Stone Forest in Water, 7km south of Huangguoshu Waterfall.

Day 07 Anshun /Guiyang
Detailed Itinerary: This morning you will visit Dragon Palace Cave, an underground water cave which requires a boat ride.
In the afternoon you will visit Tianlong Ancient Town. The ancestors of these villagers migrated from Jiangxi Province to Guizhou Province during the Ming Dynasty (1368 – 1644). Women here are still dressed in traditional Ming dynasty costumes and houses remain faithful to the Ming architectural styles.

Day 08 Guiyang - Kaili
Detailed Itinerary: Today you will be driven to Kaili, which is the capital city of the Miao and Dong Autonomous Prefecture of Southeast Guizhou, and also the base of southeast Guizhou's ethnic culture tour.

You will visit Xijiang Miao Village, where you can get general impression of the region and Miao and Dong's classification, costume and life style. Then you will head to Gejia Village.

Gejia Village: Located roughly 18 kilometers north of the city of Kaili, is home to about 400 members of the majority of Gejia, a Miao sub-group.
Meals: Hotel Buffet Breakfast & No Pork Chinese Lunch

Day 09 Kaili - Guiyang
Detailed Itinerary: After lunch you will be transfer to Guiyang airport for departure (HX353 1520-1705).

* Prices are in US dollars per person. Prices may vary according to your travel time and are higher in the high season, e.g. Labor’s Day (Apr 29-May 3, 2013&2014), China National Day Holiday (Sep 29-Oct 8, 2014), and Chinese Spring Festival (Jan 30-Feb5, 2014).
* If only one person is traveling then the single room supplement is not required. If, for example, three people book a hotel, with two in one room and one in another room, the single room supplement must be paid.
*Tour price is indicative only, please enquire for a detailed quotation.
* You will enjoy more discount if there is more people join the tour.