While the story of a few fishing villages becoming a city in thirty years is remarkable, Shenzhen was long a city in the making. Had you visited in the late-nineties Shenzhen was a conglomeration of factory hamlets, urban village and building sites with out a definable metropolitan center. Vast swathes of the city were still effectively rural. Low rise Qing dynasty house stood shoulder to shoulder with high-rise glass plated skyscrapers. 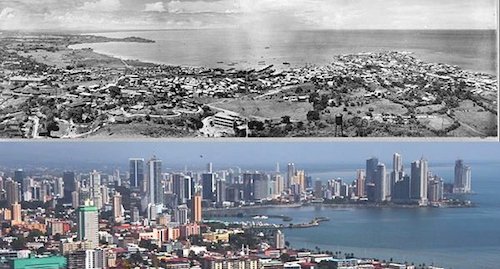 But China changes fast and indeed, nowhere in China changes faster than Shenzhen. Today the statistics speak boggle the mind. The city averages 20 per cent growth. Its population has swelled to 12 million, three million more than two thousand-year-old London. The crowning centerpiece to this heady race skyward is the Ping An International Finance Centre, an 115-storey mega structure in Futian District that is China’s second tallest towers and the world’s fourth tallest.
It can feel like the place has a license to print money. As if to express just how prosperous Shenzhen is taking, for example, the Central Business District in Futian, which is home to several luxuries, international-brand hotels including the Ritz-Carlton, the Sheraton, the Shangri-La, the JW Marriot and The Four-Seasons. And that’s just one neighborhood!

Shenzhen is famous as high-tech shopping location with Huaqiang Bei known as the world’s largest electronics market. China’s silicon valley is located in Nanshan’s high-tech park. And indeed, the city is well known as a manufacturing hub. Products like your iPhone or laptop could well have been assembled in Shenzhen. But as anyone knows, the real profits are made through financial services and innovation. Of the former Shenzhen’s stock exchange makes it a regional economic center. And of the later, the following extraordinary companies are based, not in Beijing or Shanghai, but Shenzhen, driving the city on edge towards the horizon

Founded by Pony Ma and friends in 1998, perhaps no other company has changed Chinese people’s lives as much as Tencent. The company produces a host of online games, web portholes and e-commerce service. Tencent QQ has long been the mainstay messenger service for laptops. But perhaps its most groundbreaking product is WeChat – a smart phone super app that allows you to chat with friends, share photos and videos, buy goods and services including rail and air tickets, order food, hail a taxi or rent a bike. Seriously, if you were traveling in China, you’d do well to download the application. And if you should pass through Nanshan, look for the iconic Tencent Skyscraper, which houses this USD$343 billion company.

The largest telecommunications manufacturer is also located in Shenzhen. Huawei, founded by ex-People’s Liberation Army engineer Ren Zhengfei in 1987 with registered capital of RMB21, 000. By 2010 it was included in the Global Fortune 500 for the first time. In 2014 it was worth RMB34.2 billion! A company that began by reverse-engineering foreign tech is now selling the tech back to the West, and at knock down prices. If ever a brand should be synonymous with Shenzhen’s rise, it’s this one.

The company’s name means “Build Your Dreams” The company’s name means “Build Your Dreams” and this it does with remarkable innovation in the auto-electrics field. That’s right before there was Tesla, there was BYD, a manufacturer of rechargeable batteries and automobiles that have combined the two to create green vehicles of the future. The BYD K9 ebus is a common sight in Shenzhen and has proved so successful it is now used in other parts of China like Changsha and Tianjin and even London, where it is painted the iconic color for buses, namely red

The ZTE Corporation has been producing telecommunications equipment since its inception in 1985. From its corporate campus in Shenzhen, mobile phones, computer hardware, terminals as well as Network Operators Equipment, Network Nodes and Network Elements have redefined the digital age over the decades. No wonder the company motto is Tomorrow Never Waits.

One of the primary drivers of the Chinese economy over the past few decades has been urbanization, which has required a lot of real estates. Headquartered in Shenzhen China Vanke is engaged in developing, managing and selling properties across more than 60 Mainland Chinese cities. It was listed on the stock exchange in 1991 and is worth more than HKD 165 billion.