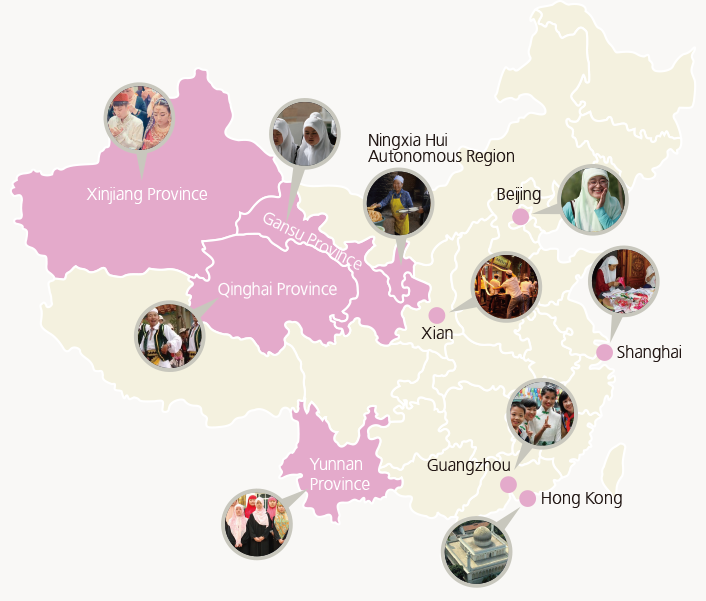 Xinjiang Province has the largest Muslim population in China. An estimated 50% of the population is Muslims. Xinjiang Uyghur Autonomous Region was once part of the famous Silk Road. The province was an important historical international trade and transportation center between China and the Mediterranean. The main cities of Xinjiang Province are Urumqi, Kashgar and Turpan.

Muslims have been present in Yunnan Province since the Tang Dynasty. Today there are more than 820 mosques in Yunnan and there is an estimated 698,265 Muslim population. Notable mosques to visit in Yunnan include Kunming Nancheng Mosque and Grand Mosque of Shadian.

Xian was formerly known as Chang'an during the Tang Dynasty which was the great ancient capital in China. As one of the major cities of the Silk Road, Xian was one of the earliest cities in China to have Muslim residents from the Persia and other Arab regions. Xian is home to the historical Great Mosque which was built in 742 during the Tang Dynasty. Today there is an estimated 600,000 Hui Muslims living in Xian. Muslim culture in Xian is prominent with Halal cusine at Muslim Street and the distinctive architecture of the local mosques.

According to a survey Muslims make up 3.4% of Gansu’s population. The Muslim population of Gansu Province is ranked second highest after Ningxia Province. Gansu Province was also part of the historical Silk Road which means that there is a rich cultural diversity spread throughout the province. Lanzhou is the capital city of Gansu Province and is the center of Muslim religious activities. Notable mosques in Gansu include Lanzhou Xiguan Mosque and Laohua Mosque located in Linxia.

Located in the Silk Road, Ningxia had been the main place for trade and transportation between the eastern and western regions of China during the ancient Tang and Han Dynasties. An estimated 20% of China’s Hui population lives in Ningxia and 34% of Ningxia’s population is of the Hui minority. Yinchuan is the capital of Ningxia and is famous for Nanguan Mosque and Najiahu Mosque.

Qinghai province lies in the northeast of Qinghai-Tibet Plateau in western China. It borders Xinjiang Autonomous Region in the north, Inner Mongolia in the northeast, Gansu province in the east and Sichuan in the southeast. Approximately 17.5% of Qinghai’s population is Muslim. Xining the capital of Qinghai Province is home to Qinghai’s largest mosque, Dongguan Mosque. The mosque has over 600 years of history and is the religious education center.

Although the Hui Muslim population only accounts for 2% of Beijing’s population there are over 70 mosques located throughout the city. The most famous mosques of Beijing are Niujie Mosque, Dongsi Mosque, Nandouya Mosque and Haidian Mosque. Each mosque has its own unique architectural style and history.

Shanghai has an estimated Muslim population of 70,000 from 10 different ethnic minority groups. Muslims have been present in Shanghai since the Yuan Dynasty and Songjiang Mosque was the first mosque built during this period. One of Shanghai’s most famous mosques has to be Xiaotaoyuan Mosque which is also the where the Shanghai Islamic Association is located.

Located in the south of China, Guangzhou played an important role as one of the main port cities for the Sea Silk Road with a history of more than 2,000 years.

Guangzhou’s Muslim community is said to be one of the earliest with the establishment of Guangzhou Huaisheng Mosque during the Tang Dynasty. The mosque was named in memory of Islamic Prophet Muhammad.

Islam was first introduced to Hong Kong in the middle of the 17th century. In 1605, the arrival of the British East India Company brought along the first group of Muslims to Hong Kong. Muslims were mainly distributed in Tsim Sha Tsui, New Territory and the Central District of Hong Kong. In 1870 the first Mosque was built on Shelly Street and was named Shelly Street Mosque. Today, other famous mosques in Hong Kong are Kowloon Mosque and the Islamic Center.

2000 characters
Feel free to contact us if you require any further information.
Why choose us
Stress Free Services
Guaranteed Satisfied Itineraries
Authentic Halal Tour Experience
How to Book